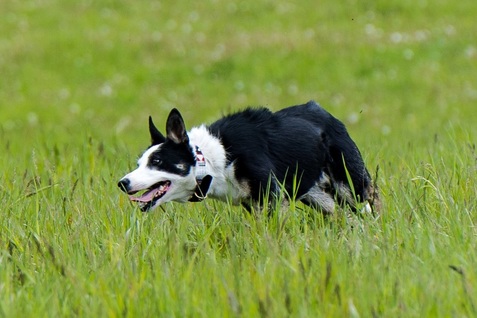 ​I purchased Glen from Wiet Van Dongen of Belgium.
I am hoping he will be a good replacement for Craig.
Glen will be my work dog at home as well run in open
​sheepdog trials.

Craig is now enjoying retirement on our couch

2016 Western Canadian Driving Champion
After a promising start to his nursery year in June 2011 Craig broke his leg doing farm work and was no longer able to compete in 2011. Due to the broke leg Craig was still unable to compete in 2012.
In 2013 Craig began running in open.
He is a competitive open dog almost always placing in the top 10
Photo By Rachel Ritland

ABCA #312072
DOB: June 1, 2007
Breeder: John Lawson, Alabama, USA
Eyes: Affected
Hips: fair
Pedigree
I purchased Meg in July 2010 from David and Christine Henry in Virginia. Meg is a sweet little thing and you can't help but fall in love with her.
2012 reserve Champion Calgary Stampede World stockdog championships
2011 was the first full year of Meg and I competing together.
We made the semi finals at the USBCHA National Finals in Colorado.